Your cart is currently empty.

Sign up to our newsletter for 10% off your first order

Where and how to use:

The world’s only commercial source of ametrine is the Anahi mine in southeastern Bolivia. Legend has it that a Spanish conquistador discovered the mine’s location in the 1600s and introduced the gem to Europeans when he presented several specimens to his queen. The mine had been given to him as a dowry when he married a native princess named Anahi. After that, the mine was lost for more than three centuries. Rediscovered in the 1960s, the mine’s ametrine began appearing on the market again during the 1970s. Today the mine, named Anahi for the legendary princess, also produces natural amethyst and citrine.

Disclaimer: all of our crystals are ethically sourced, they are fully cleansed with white sage, we infuse them with reiki and they are played over powerful and high vibrational mantras before dispatch. Please note that all crystals, minerals, rock and fossils are a natural product from mother earth and are rarely perfect, this means that we try to capture as many angles on our products as possible.

Fast delivery, great customer care (information spot on) and all products arrived according to their respective descriptions.
I appreciate the additional value of the information and knowledge made so generously available to any themysticwolf.com visitor.
Many notes relating to my crystals refers to themysticwolf.com. Thank you so much!

I’ve ordered from this site 5 times now I believe.
I love the detailed descriptions of each stone. I can spend hours on this site just researching the benefits each crystal has to offer. My favorite is Citrine. It has been working wonders for my family. 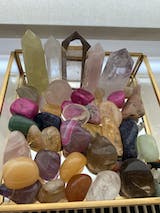 All of the stones are beautiful! Thank you:)